Surprising Foods with More Sugar Than a Krispy Kreme Doughnut

Another, fairly comprehensive (despite its length, still worth the read!) article on the dangers of sugars, including a call to limit its intake, thereby allowing for weight loss, and reverting your body to its natural health and energy.

I am all for this article, except the very last bit, about coffee.  Chinese Medicine and various other complementary health concerns believe coffee causes undue stress on your adrenal glands, and so can be very detrimental to your long-term health and energy levels.  In short, if something gives you a “jolt,” it’s coming from your adrenal glands, which becomes costly over time.

A major new report by Credit Suisse Research Institute1 explores the impact of sugar and sweeteners on humans’ diets, with some shocking revelations and statistics.

Worldwide, the average person consumes 70 grams of sugar and high-fructose corn syrup per day (that’s 17 teaspoons), up 46 percent from three decades ago.

Yet, in countries like the US, Brazil, Australia and Mexico, sugar consumption is actually much higher, averaging 40 teaspoons per person per day for Americans (compared to just seven for those living in China).

And when children younger than 4 are removed from the mix, sugar consumption in the US rises by another 5-10 percent! It’s a shocking amount of sugar, but what is even more startling is the potential damage it can do to your health.

9 Foods with More Sugar Than a Doughnut

While you may consider yourself savvy when it comes to spotting sugar-laden foods, the report revealed some real sugar shockers. Before we get into just how troublesome all of this excess sugar may be, let’s first look at how stealthily it is hidden in some seemingly healthful foods.

The following nine foods all have more sugar than a Krispy Kreme doughnut (which, for comparison, contains 10 grams of sugar):

Added Sugars Represent 17 Percent of the Average US Diet

…but when all forms of sugars are included, the data suggests that sugar makes up 38 percent of the typical US diet.

Among added sugars, 43 percent come from sweetened beverages, which is concerning since it’s now known that calories in liquid form are processed differently by your body than those consumed in solid form. The report noted:2

“Mattes et al3 demonstrated that ingesting a beverage did not impact the amount of calories that were ingested during a subsequent meal or in the 24-hour period after the beverage was consumed.

When a solid food was given, however, the number of calories that were ingested in the following meal and in the following 24-hour period was reduced, suggesting the solid calories that had been ingested were processed in a different way, either in the intestine or in the central nervous system, so that the body appropriately adjusted its subsequent calorie intake.

With calories from liquids, however, the body does not seem to compensate and the calories are ‘added on’ to what the person would have ingested anyway.”

In all, the major sources of added sugars in the typical US diet are as follows:

Is There a Human Sugar Threshold?

Health conditions such as obesity, diabetes and metabolic syndrome have all been rising with rates of sugar consumption, leading many to assume that there is a dose-response relationship, i.e. the more sugar you consume, the greater your risk of health problems becomes.

The report noted an interesting alternative theory, which is that the linear dose-response model may be too simplistic. Instead, there may be a threshold level in the body for sugar below which it causes little or no harm… but once you pass it, health problems may emerge. Consuming small amounts of sugar may not be a problem, but consuming sugar by the pound certainly is.

“While medical research is yet to prove conclusively that sugar is the leading cause of obesity, diabetes type II and metabolic syndrome, the balance of recent medical research studies are coalescing around this conclusion.

Advances in understanding the negative effects of refined carbohydrates on blood sugar regulation and cholesterol, and the metabolic impacts of fructose, are undermining the traditional view that all calories are the same,” the report stated.

Indeed, the notion that “a calorie is a calorie” has been firmly debunked by science. Not all calories count equally. And the “calories in, calories out” hypothesis for maintaining weight has equally been shown to be incorrect. It is in fact FAR more important to look at the source of the calories than counting them if you’re trying to lose weight.

In short, you do not get fat because you eat too many calories and don’t exercise enough. You get fat because you eat the wrong kind of calories. At the end of the day, your consumption of carbohydrates, whether in the form of grains and sugars (especially fructose), will determine whether or not you’re able to manage your weight and maintain optimal health. This is because these types of carbs (sugar, fructose and grains) affect the hormone insulin, which is a very potent fat regulator. Fats and proteins affect insulin to a far lesser degree.

Why Calories from Fructose May Be Especially Detrimental – The Fat Switch

Fructose is in fact far worse than other carbs because the vast majority of it converts directly to FAT, both in your fatty tissues and in your liver. And this is why counting calories does not work… As long as you keep eating fructose and grains, you’re programming your body to create and store fat.

Research by Dr. Richard Johnson, chief of the Division of Renal Diseases and Hypertension at the University of Colorado and author of The Sugar Fix and The Fat Switch, demonstrates that large portions of food and too little exercise are NOT solely responsible for why you are gaining weight. Rather it’s fructose-containing sugars that cause obesity – not by calories, but by turning on your “fat switch,” a powerful biological adaptation that causes cells to accumulate fat in anticipation of scarcity (or hibernation). According to Dr. Johnson, based on his decades of research:

“Those of us who are obese eat more because of a faulty ‘switch’ and exercise less because of a low energy state. If you can learn how to control the specific ‘switch’ located in the powerhouse of each of your cells – the mitochondria – you hold the key to fighting obesity.”

Excessive refined fructose consumption leads to insulin resistance, and insulin resistance appears to be at the root of many if not most chronic disease. Insulin resistance has even been found to be an underlying factor in the initiation and promotion of cancer. The research is quite clear… for instance, mice fed a diet containing 25 percent sugar – the equivalent of three cans of soda daily – were twice as likely to die as mice fed a similar diet without sugar.4

Refined fructose, in particular, also raises your uric acid levels – it typically generates uric acid within minutes of ingestion, which in turn can wreak havoc on your blood pressure, insulin production, and kidney function. So far, scientific studies have linked fructose to about 78 different diseases and health problems. For example, fructose may:5

Where Else Is Sugar Hiding?

Manufacturers often label their products deceptively, claiming they are fat-free to distract you from a high sugar content, for instance. Check out the infographic below for even more shocking amounts of sugars in common foods. 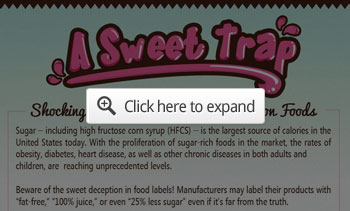 When you eat sugar it triggers the production of your brain’s natural opioids – a key initiator of the addiction process. Your brain essentially becomes addicted to stimulating the release of its own opioids. The intensity of this effect is experienced on the same level as morphine or heroin, and preliminary research in animals indicates that the pharmacological effects of sugar include dopaminergic properties, as it has recently been shown to be more addictive than intravenous cocaine.8

Researchers have speculated that the sweet receptors (two protein receptors located on your tongue), which evolved in ancestral times when the diet was very low in sugar, have not adapted to the seemingly unlimited access to a cheap and omnipresent sugar supply in the modern diet. Therefore, the abnormally high stimulation of these receptors by our sugar-rich diets generates excessive reward signals in your brain, which have the potential to override normal self-control mechanisms, create tolerance and withdrawal symptoms, thus leading to addiction.

According to Dr. Robert Lustig, it is virtually impossible to exert enough cognitive willpower to overcome this 24/7 biochemical drive! That said, limiting or eliminating your sugar intake is the most effective way to break free from this disease-causing cycle. If you still want to use a sweetener occasionally, the sweet herb stevia makes a good, non-addictive sugar substitute. (It is important to avoid ALL artificial sweeteners, which can damage your health even more quickly than sugar.)

If you currently eat sugar, there’s a good chance you’re struggling with sugar addiction. So I highly recommend trying an energy psychology technique called Turbo Tapping, which has helped many “soda addicts” kick their sweet habit, and it should work for any type of sweet craving you may have. Remember that in order to minimize your sugar intake, you need to avoid most processed foods, as most contain added sugar. As mentioned, even savory foods like salad dressing, soup, and bread often contain sugar.

For optimal health, eat natural whole foods primarily, and limit your fructose consumption to below 25 grams per day, including that from fresh fruit. A couple of other tricks to try to kick your sugar cravings:

This article was posted in Uncategorized. Bookmark the permalink. Follow comments with the RSS feed for this post. Both comments and trackbacks are closed.
4016191912