Students who have taken classes from me will recognize what I am about to share with you. Hopefully, this information will encourage you to take up the practice of Qi Gong for yourself and incorporate it into the therapy you provide for your patients. You do not need any special equipment, shoes, Mandarin clothing, or a special place to practice. It can be engaged anywhere and by anyone, including those who are bed-ridden or in a wheelchair.

Qi Gong is one of the treasures of Chinese medicine. In Chinese, Qi Gong (qìgōng 氣功) consists of two characters, the first being 氣 qì, which is a compound character combining the character for “air” 气 qì and the second is the radical for “rice” 米 mǐ. (See Qi Equations below.) Gong represents the Chinese character gōng 功, which is translated variously as “merit”, “skill”, “mastery”, “cultivation”, or simply “exercises”. Thus, Qi Gong can be understood as “breathing exercises for the cultivation of Qi”.

All forms of Qi Gong have certain features in common. 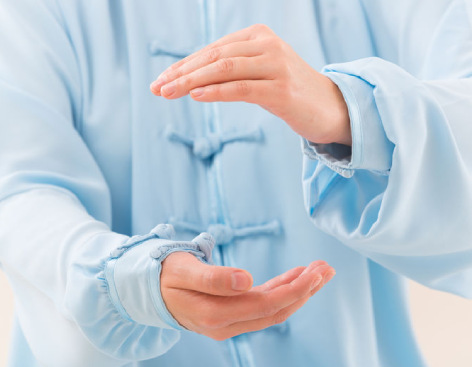 The diaphragm is the primary muscle of breathing. Most people scarcely breathe with their diaphragm and lift their rib cage by mainly using the intercostal muscles to inhale instead. This causes the inhale to be an action and the exhale, a relaxation, driven by the elastic recoil of the lungs. The result is that breathing primarily occurs in the upper part of the lungs and it is a “shallow” breath.

In Qi Gong breathing, the action is focused on the exhale by intentionally contracting the diaphragm and abdominal wall muscles, squeezing out the carbon dioxide until the lungs are empty. The inhale fills the lungs accommodated by a relaxation of the diaphragm and abdominal wall muscles. This is a deep breath and is illustrative of what is meant by the Chinese medicine adage, “The Kidneys must grasp the Lung Qi.” The diaphragm literally sits on top of the adrenal glands of the kidney and when breathing using the diaphragm in this manner, one fills the lungs all the way down to the kidneys.

During the practice of Qi Gong ideally one maintains a calm, meditative state, focused on the breath and one’s stance (or form) and gentle movement. Visualization of the flow or presence of Qi and the aesthetics of the form are also maintained.

Stance and Intentional Movement (or non-movement)

Although sitting Qi Gong and standing Qi Gong (Tree Hugging!) do not involve movement, there are literally hundreds of forms of Qi Gong that involve various movements. These movements promote the flow of Qi and activate the lymphatic system. Certain forms were passed down in families as part of the lineage of Qi Gong. It has been said that Tai Ji Quan is a formal collection of Qi Gong exercises intended to move Qi in all of the Meridians and as an aid to the memorization of the Qi Gong movements.

Although its roots originated thousands of years ago, certainly its revival has occurred since the advent of Traditional Chinese Medicine beginning in the 1950s. There are over 75 ancient forms and dozens of contemporary ones that can be categorized as martial, medical, meditative, and health-promoting Qi Gong. Today, in the United States there are hundreds of teachers of various forms of Qi Gong. If you are looking for formal training, I can suggest the following website: https://www.qigonginstitute.org/directory. Recently, this 20-minute, YouTube video from Peter Deadman was brought to my attention. Excellent teaching for difficult times.

But what is Qi really, and why should I cultivate it?

Qi is a polysemous word that defies easy translation into English, although some authors choose “Energy” but in Chinese medicine, it is much more than that. Let’s dive into some of the various aspects of Qi.

This is the most common understanding of Qi and it covers a lot of ground. Some qualify Qi by referring to it as “vital energy” or “life force”, meaning the energy that is essential for and promotes life. A more expansive definition would include energy in all its forms, including every wavelength of light, heat, bio-electric and electro-magnetic energy, and consciousness. In Chinese medicine, the concept of Qi is closely related to health and well-being since it not only flows throughout the meridian system, but also permeates every organ and tissue in the body. Qi extends to fields that surround every living thing. Modern science promotes the ideas of electrons providing energy to every cell of the body via ATP, FADH2, and NADH (remember the Krebs cycle?). Yes, indeed, this is Qi.

Qi is the inherent intelligence of the living organism. From the beginning of the embryonic state to the full development of an adult, every part of the body “knows” how to perform in a manner that is appropriate for its part in the whole. For instance, although I am reasonably intelligent, “I” do not know how my circulatory system performs its role in my being alive, but my heart and vessels do know this, perfectly. In fact, if I were in control of my Heart Qi, I probably would eventually forget to make my heart beat and move the blood to bring nutrition and oxygen to every cell. Likewise, every part of my body does its job through this innate intelligence or Qi.

The human body gathers information via the sense organs, the central, peripheral, and autonomic nervous systems, neurotransmitters, hormones, specialized cells, and more. This information is another form of Qi and this collection of data and impulses is analyzed and determines responses of the organism to its internal and external environment. This regulation of internal processes is accomplished through various processes to maintain homeostasis including positive and negative feed-back loops. This aspect of Qi creates harmony, balance, health, and well-being.

Every form of Qi in the body engenders specific functions. In fact, the metaphorical physiology of Chinese medicine is organized by assigning certain functions to the Zang-fu. For example, it is the Qi Hua (transformation of Qi) function of the Kidneys, working with the Urinary Bladder that removes waste from the blood to create urine.

Now, I want to examine some of the concepts that we learned in our study of Traditional Chinese Medicine to see if we can gain further insight into these ideas.

The first equation represents the basic understanding of how Qi is created according to Chinese medicine. Short and to the point. Other than Yuan (original) Qi, this explains the source of Qi in a living system. Let me expand it just a bit.

Derived from biochemistry, the second equation is a simplified statement of the extraction of energy from glucose (or glycogen), called glycolysis. In the human body, glucose is the primary fuel in cellular metabolism and the body has several pathways to convert the major macronutrients into glucose. Glucose is oxidized, metabolically, and the result is energy, including heat (= Yang) plus intracellular water (= Yin) and carbon dioxide, which is a waste product, a gas that leaves the system (notice the up arrow ↑).

Next, I have added the Zang organs whose Qi is responsible for each factor in the equation. When I first did this, I noticed that I was looking at the Five Elements at work. I must confess that I assigned carbon dioxide to the Liver and Wood Element by process of elimination. Yet, the correspondences seem obvious. Looking at the Control Cycle, I noticed something remarkably interesting. 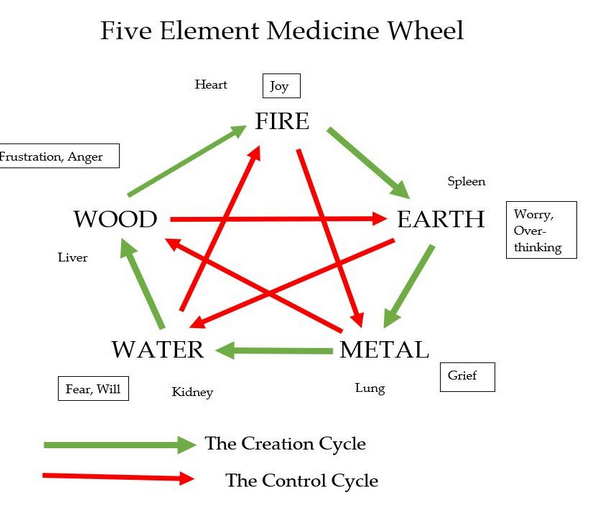 When I learned the Five Elements in school, it was explained that Metal controlled Wood and you could remember it by thinking of a metal axe chopping down a tree. Great image, but what did it mean therapeutically? Then, it dawned on me that this is how I can accept carbon dioxide as Wood. When breathing, if you focus on the out breath, making it longer than the in breath, this is Metal controlling Wood. Focusing on the removal of more carbon dioxide is removing a waste product. In fact, breathing out IS letting go.

This is the great teaching of the Metal Element. The emotion associated with Metal is grief. All the classic emotions have their appropriate expression. Circumstances arise that engender an emotional response. Pathology occurs when one holds onto and cultivates that emotion. After a period of grieving, one must let go because a new in-breath is happening. This is very appropriate to our current situation. Coping with a pandemic and feeling some grief for what we think we have lost. Life goes on, a new moment, a new emotion is about to occur. Let it go. Just try holding onto your breath. You can, for a while, but you must eventually let it go and breathe again.

The emotion associated with Wood is frustration and anger. You can imagine what you want, but what do you do when you do not get what you want? Of course, you can reach down to your Kidneys and access your Will. Your Will allows you to try to go through, around, over, or under an obstacle. Exercising Will over a long enough period of time, however, depletes Yin or Yang (or both). Fortunately, as can be seen from the Five Element Medicine Wheel, the practice of Qi Gong, by engaging the Metal Element, replenishes the Water Element and helps sustain the Kidneys via the Creation Cycle.

If and when Will fails to achieve your desire or dreams, you may be left frustrated and angry, as can be vividly seen since Water creates Wood. Since Excess accumulating in the Wood Element creates various pathologies including Disturbance of Shen, what can be done? Practice Qi Gong. Count your breaths to ten, focusing on the out-breath, and let go. In fact, shēng qì 生氣 or “creating breath/Qi”, means to be angry in Chinese. By releasing this excess Qi in our breath, we almost literally deflate our anger. What is next? Take in another breath, let go of your thoughts about what should be and accept what is, which is a form of Love and the only true antidote to anger.

In conclusion, I trust these insights will encourage you to practice Qi Gong. The value is in the doing, that is, the breathing. Teach yourself, teach your patients to breathe. Go for harmony, balance, health, and well-being. Qi Gong will help get you there—and the world will be a better place.

Understanding How Qi Gong Promotes Health was last modified: May 8th, 2020 by lynn

This article was posted in Chinese Medicine, Meditation and tagged breath, meditation, qigong. Bookmark the permalink. Follow comments with the RSS feed for this post. Both comments and trackbacks are closed.
4016191912